As the moment of truth draws ever closer, the political momentum against deep-sea mining is gaining ground. In the space of six months alone, 12 States have made bold political decisions that put nature where it should be: front and centre. Over the course of the meeting, France, New Zealand, Germany and Panama joined Palau, Fiji, Samoa, the Federated States of Micronesia, Chile, Costa Rica, Spain and Ecuador in calling to pull back from the brink of a vast new extractive sector on the grounds of the environmental, social and economic risks.

French President Emmanuel Macron called for a ban in an opening address at COP27 and France reaffirmed this position during the ISA meeting this week, warning: “As the effects of climate change become increasingly threatening and the erosion of biodiversity continues to accelerate, today it does not seem reasonable to hastily launch a new project, that of deep seabed mining, the environmental impacts of which are not yet known and may be significant for such ancient ecosystems which have a very delicate equilibrium.”

The DSCC and its member organisations called on countries to prioritise safeguarding the health of the ocean by defending the deep from destructive exploitation.

The DSCC’s Campaign Lead Sofia Tsenikli stated: “World leaders are finally waking up to the imminent risks of deep-sea mining and the need to protect the blue heart of our planet that sustains us all. Rather than being remembered as the generation that delivered the final blow to our planet by unleashing a new industry which could have catastrophic impacts, we urge States to put sustainability and intergenerational equity first. The DSCC welcomes the leadership shown by countries calling for a stop to deep-sea mining and we urge all States to follow before it is too late.”

The Deep Ocean Stewardship Initiative (DOSI), a global network of deep sea scientists, present throughout negotiations, continued to warn delegates that species extinction and damage to fragile deep sea ecosystems would be inevitable and irreversible if the industry were to go ahead. A new scientific report presented during the meeting at a side event hosted by the DSCC and Sustainable Ocean Alliance, also highlights the risks that deep-sea mining poses to critical carbon stores and biodiversity in the deep sea.

The ISA meeting focused on negotiating a ‘mining code’ that, if adopted, would allow countries to apply for mining contracts as early as July 2023, due to the triggering of a loophole referred to as the “two-year rule”. Despite a number of States backing variously a precautionary pause, moratorium or ban, there is still a very real possibility that this destructive industry could commence next year as countries such as the UK and Norway are pushing for adoption of regulations by July 2023.

On the penultimate day of Council, serious concerns were raised about the ability of the Authority to act as an effective regulator for an industry that could open the largest mining operation ever seen in human history. Almost unanimous concern was raised across Council on repeated violations that have already taken place by would-be miners during the exploration phase of deep-sea mining. Numerous delegations also raised concerns over the Authority’s recent approval of test-mining, which was granted behind closed doors, without any consultation with stakeholders or ISA member countries.

The DSCC’s Legal Advisor, Duncan Currie stated that “It is clear that as it stands the Authority is not fit to act as an effective regulator of a new, destructive industry that threatens to incur enormous damage on deep-sea habitats and ecosystems.” Currie added: “Rather than catalyse the rush to mine the deep, the ISA should focus on promoting deep-sea scientific research, to advance the protection of critical and fragile deep-sea habitats.”

Emma Wilson, the DSCC Policy Officer stated: “Rather than opening up a new frontier of industrial mining and extending the footprint of terrestrial mining into the depths of our ocean, we should be moving towards more environmentally and socially responsible models of production, consumption and reuse.” Wilson added “World leaders have a unique opportunity to take concrete action to protect one of our planet’s last wilderness areas from irreversible destruction – the only way forward is a moratorium on deep-sea mining.” 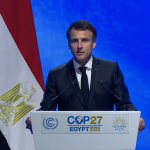 The Deep Sea Conservation Coalition (DSCC) today welcomed the announcement by French President Emmanuel Macron that France is calling for a ban on deep-sea mining.

END_OF_DOCUMENT_TOKEN_TO_BE_REPLACED As final preparations for the landmark UN climate and biodiversity conferences get underway, the International Seabed Authority (ISA), based in Kingston, Jamaica, pushes to develop regulations that if adopted, would see our planet’s largest carbon store opened to the biggest mining operation in human history.

END_OF_DOCUMENT_TOKEN_TO_BE_REPLACED

We use cookies on our website to give you the most relevant experience by remembering your preferences and repeat visits. By clicking “Accept All”, you consent to the use of ALL the cookies. However, you may visit "Cookie Settings" to provide a controlled consent.
Cookie SettingsAccept All
Manage consent

This website uses cookies to improve your experience while you navigate through the website. Out of these, the cookies that are categorized as necessary are stored on your browser as they are essential for the working of basic functionalities of the website. We also use third-party cookies that help us analyze and understand how you use this website. These cookies will be stored in your browser only with your consent. You also have the option to opt-out of these cookies. But opting out of some of these cookies may affect your browsing experience.
Necessary Always Enabled
Necessary cookies are absolutely essential for the website to function properly. These cookies ensure basic functionalities and security features of the website, anonymously.
Functional
Functional cookies help to perform certain functionalities like sharing the content of the website on social media platforms, collect feedbacks, and other third-party features.
Performance
Performance cookies are used to understand and analyze the key performance indexes of the website which helps in delivering a better user experience for the visitors.
Analytics
Analytical cookies are used to understand how visitors interact with the website. These cookies help provide information on metrics the number of visitors, bounce rate, traffic source, etc.
Advertisement
Advertisement cookies are used to provide visitors with relevant ads and marketing campaigns. These cookies track visitors across websites and collect information to provide customized ads.
Others
Other uncategorized cookies are those that are being analyzed and have not been classified into a category as yet.
SAVE & ACCEPT