You Are Here: Home » Latest News » Mining » The tide turns on risky deep-sea mining as negotiations get underway 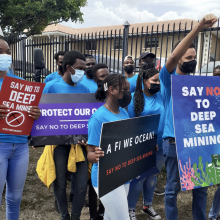 Negotiations have begun to develop a mining code that, if adopted, could see the largest extractive operation in human history begin in the deep sea.  But as negotiations get underway, the chorus of concern surrounding the emerging industry has amplified.

The International Seabed Authority (ISA), the UN intergovernmental body charged with regulating the emerging deep-sea mining industry, is currently holding its Council and Assembly meetings in Kingston from 18 July – 5th August. Scientists continue to warn that if the industry were to go ahead, it would result in an irreversible loss of biodiversity and would threaten our planet’s largest carbon sink at a time of global climate emergency.

Earlier this month, the Federated States of Micronesia announced that they had officially joined the Alliance of Countries Calling for a Deep-Sea Mining Moratorium, launched by Palau and Fiji at the United Nations Ocean Conference in Lisbon at the end of June. The delegation for the  Federated States of Micronesia reiterated its support for a moratorium during the ISA’s Council meeting last Thursday, stating that “The Ocean is a unitary whole, and what happens in the international seabed Area could very well impact coastal waters and territories.” This is the first time ever that a country has brought a moratorium position to the International Seabed Authority.

During last week’s negotiations, France also addressed the growing momentum for a moratorium that peaked during the UN Ocean Conference, stating that  “we are all aware that our organization needs to heed the alarm bells that were launched in Lisbon.” The delegation also questioned the rush to mine the deep, following Nauru’s triggering of an obscure legal mechanism known as the two year rule.

Chile and Costa Rica both expressed serious concerns about the hasty attempts to finalize regulations within the next year. Chile suggested that the rush to adopt regulation to allow deep-sea mining was for the benefit of one mining company and was counter to the interests of humankind. Costa Rica stated that if we are serious about protecting the marine environment, “the only way to do so now is to commit ourselves to not beginning the exploitation of seabed until we have enough data to make science-based decisions”.

Spain took the position that we should not “move to the exploitation phase if the environmental measures are not adequate”, and Monaco called for more time and support for science and cautioned the need to adhere to the precautionary principle.

Nauru also announced it was to renegotiate its contract with the contractor NORI, a subsidiary of The Metals Company. The DSCC called on Nauru to reconsider sponsoring NORI in light of the global anxiety the 2 Year Clause has caused.

Meanwhile, groups representing artisanal fishing communities from Africa and the Pacific have highlighted the risks posed to livelihoods and food security, warning that the industry could “jeopardize the future of coastal communities.”

Emma Wilson, representing OceanCare during the negotiations in Kingston welcomed the increased recognition from States of the many risks posed by deep-sea mining, commenting: “In the absence of critical independent scientific information or social license for the industry, ISA member states are finally waking up to the dangers of strip-mining our planet’s largest remaining wilderness.”

The continuation of the ISA’s 27th Council meeting has also seen tight new restrictions on participation for observers and States alike as ill-timed renovations are carried out on the Jamaica Conference Center in Kingston. The restrictions have resulted in civil society and scientists being separated from member States and relegated to a windowless basement room in a hotel. There have also been numerous reports of media access to the meeting being denied. To add insult to injury, on the first day of negotiations, ISA Web TV, the platform that many were relying on to follow negotiations remotely due to the restrictions, was abruptly switched off by the ISA Secretariat with no prior notification. This led to significant pushback from many member States and observers, who pointed to concerns around transparency and inclusivity. After a long debate, the broadcast was reactivated.

“The ISA should adequately represent the interests of humankind and be a transparent, accountable body committed to defending the species, biodiversity and ecological integrity of the global deep sea commons. As it stands, the ISA continues down the path of an irresponsible effort to adopt regulations to allow mining to begin as early as the second half of 2023. But now we are finally seeing a number of countries involved in the ISA negotiations beginning to push back against this rush to open up a whole new frontier of industrial resource extraction in the deep-sea, recognizing that this is an environment that we all rely on to keep our planet functioning.”

“Until the ISA becomes a body that all of humanity can have faith in, and is capable of delivering on its mandate to protect the environment, the only way forward is a moratorium.”