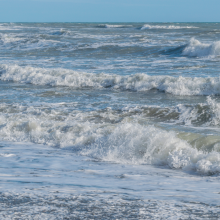 This week, G7 Ministers of Climate, Energy and the Environment met in Berlin, ahead of the 48th summit, set to take place in June to address the multiple crises that are endangering our climate and
environment and today issued a meeting communiqué.

On the positive side, it is good to see that the G7 ministers are “Fully aware of the potentially devastating impacts [of deep-sea mining] on marine ecosystems and the functioning of the ocean as a climate regulator”; that they “will continue enhancing knowledge on the deep sea, its unique ecosystems and the impacts of possible deep-sea mining” and presumably develop a “robust knowledge basis on the deep sea marine environment and on the risks and potential impacts of deep sea mining operations”.

However, the assertion that “developing effective environmental standards as binding elements in future permitting processes”, processes that are “able to demonstrate the environment is not seriously harmed”, is not likely to prevent ‘potentially devastating impacts’. Rather it is more likely to leave a lot of room for allowing extensive damage to the marine environment, including loss of biodiversity, species extinctions and degradation of ecosystem services including climate change mitigation, depending on how “seriously harmed” is defined. The debate at the ISA to date on the question of how to define serious harm has not been encouraging.

The communiqué also fails to address the need to reform the ISA, including its voting and decision-making structure and bylaws that would allow as few as 16 members of the Legal and Technical Commission of the ISA and a handful of countries on the Council of the ISA to guarantee that a country or company gets a license to mine, once regulations are adopted by the ISA, even if the majority of the member countries of the ISA are opposed. The negotiations at the ISA to develop mining regulations are focused primarily on mining polymetallic nodules in the deep abyssal plains of the eastern Pacific Ocean.

Scientists have estimated that in the areas impacted by mining nodules and nodule dependent fauna may take millions of years to recover, and even the partial recovery of the the animals living in the sediment may take hundreds to thousands of years.

It is encouraging to see, in paragraph 4 of the Communique, that the G7 ministers “express our deep concern regarding the triple global crisis of climate change, biodiversity loss and pollution…driven largely by human activity and by unsustainable patterns of consumption and production” and that they “commit to immediate, short- and medium-term action in this critical decade, leveraging the synergies between climate and biodiversity action, the clean energy transition and environmental protection, which should inform long-term transformative change”.

In this regard, it is important to point out that deep-sea mining is not needed to transition to renewable energy economies (e.g. as per reports from the UK House of Commons; High Level Panel for a sustainable ocean economy; University of Technology Sydney); that it will exacerbate the biodiversity crisis (Van Dover et al, 2017; Niner et al, 2018); and that rather than promoting a transition to more circular economies and better use of the resources we as society already have, it would perpetuate unsustainable patterns of consumption and production.

If the G7 countries are serious about preventing “devastating impacts [of deep-sea mining] on marine ecosystems and the functioning of the ocean as a climate regulator” of which they are fully aware, they should state outright that no mining of polymetallic nodules in the eastern Pacific should be permitted.

Nor should deep-sea mining be permitted elsewhere by the ISA until far more knowledge is obtained on the deep sea, its unique ecosystems, its role in regulating the climate and acting as a carbon sink, and the risks and potential impacts of deep-sea mining operations.

There is nothing sustainable about deep-sea mining – it is the antithesis of sustainable development as defined by the 2030 UN Sustainable Development Goals, in particular SDG 14, Target 2.

Matthew Gianni is the the DSCC’s Co-Founder and serves as Political and Policy Advisor for the Coalition.