Thousands of tonnes of protected corals damaged by commercial fisheries 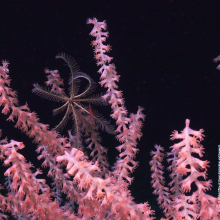 New data shows up to seven tonnes of coral has been brought up to the surface of the ocean by commercial bottom trawl fishers in a single year.

However, this may just be the tip of the iceberg according to new science, which reveals that 7 tonnes coming up would mean that somewhere between 763 and 2,401 tonnes of coral were being destroyed on the seabed.

“The Government has a choice to make. They can either protect Aotearoa’s amazing deep-sea corals, and all the life they support. Or they can continue to vote for ocean destruction at the hands of the bottom trawling industry. Close to 70,000 New Zealanders want seamounts protected, it’s high time the Government listened to them.”