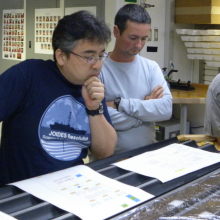 Microbes extracted from deep sea sediments that settled during the age of the dinosaurs have been revived in the lab after eons spent in a dormant state. Despite needing oxygen to survive, the bacteria were able to make do with only trace amounts and almost no food for more than 100 million years. Once reanimated, most of the microbes were able to feed and multiply with seemingly no ill effects attributed to their long period of rest.

“The most exciting part of this study is that it basically shows that there is no limit to life in the old sediments of Earth’s oceans,” Steven D’Hondt, an oceanographer at the University of Rhode Island and a coauthor of the study, tells Reuters. “Maintaining full physiological capability for 100 million years in starving isolation is an impressive feat.”The endeavor, described Tuesday (July 28) in Nature Communications, shows just how little is known about the physiological limits of life on Earth, the authors report.