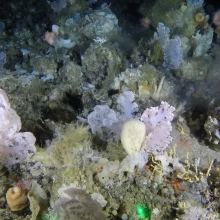 In the depths of the water just west of Greenland, scientists have discovered a previously unknown coral garden. They described the ecosystem in a new study published in Frontiers in Marine Science on Monday.

The garden sits 1,600 feet below sea level, where the pressure is 50 times greater than at the surface. The researchers found it using a low-tech rig called a “benthic sled,” consisting of a GoPro camera, lights, and laser pointers, which they set into special pressure-proof cases, mounted on a steel frame, and hung from their research vessel.