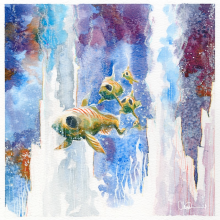 Marine scientists from around the world have issued a stark warning about the emerging industry of deep sea mining, stating that its development “puts the overall health of ocean ecosystems under threat” and could contribute to climate breakdown. Greenpeace activists went to the International Seabed Authority (ISA) annual meeting in Kingston, joined by the members of Jamaica Environment Trust and representatives of several other Jamaican civil society organisations, to deliver a  letter of concern by 28 scientists from eight countries to the participants of the meeting. A banner was unfurled at the event which said “No deep sea mining” as Greenpeace demands protection of the sea bed and global oceans.

The Greenpeace ship, Esperanza, sailed to Jamaica from a major battleground for the deep sea mining industry, the “Lost City” in the mid-Atlantic, that is under threat after the ISA granted an exploration contract in the region. The Esperanza is in the middle of a pole to pole expedition from the Arctic to the Antarctic, highlighting threats to the ocean and calling for Global Ocean Treaty to protect international waters.