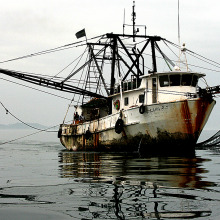 The Annual Meeting of the South Pacific Regional Fisheries Management Organisation (SPRFMO) today adopted a measure (regulation) for managing deep-sea fisheries on the high seas of the South Pacific. The regulation will allow New Zealand vessels to continue deep-sea bottom trawling on biodiversity hotspots on seamounts and deep mountain ridge systems on the high seas, putting large percentages of deepwater corals, related ecosystems, and rare species at risk in the Southwest Pacific and Tasman Sea.

At the same time, the meeting reviewed the activities of a New Zealand vessel, the Amaltal Apollo, caught repeatedly bottom trawling last year in an area closed by SPRFMO to protect deepwater corals. Pending the outcome of prosecution against the captain and company, scheduled to begin in February in Nelson, the SPRFMO meeting decided to keep the vessel on a draft list of illegal, unreported and unregulated (IUU) fishing vessels. New Zealand trawl vessels have dragged up many tonnes of corals and other vulnerable deep-sea habitat forming species over the past ten years of deep-sea fishing on seamounts on the high seas according to a report provided to SPRFMO by New Zealand in September of last year.

The United Nations General Assembly has repeatedly called on States and regional fisheries treaty organisations, such as SPRFMO, to prevent bottom trawl fishing in sensitive habitats and other areas of deep-sea biodiversity or else prohibit bottom trawl fishing. The UN’s 1st World Ocean Assessment in 2016, in reviewing the status of seamounts worldwide, expressed concern that “deepwater trawling has caused severe, widespread, long-term destruction of these environments globally”.

“We are very disappointed that SPRFMO member countries were convinced by New Zealand and Australia to adopt a deeply flawed regulation that will allow continued degradation and destruction of biologically rich and diverse ecosystems in the deep-sea from the Louisville Ridge in the western central South Pacific all the way across to the Tasman Sea” said Matthew Gianni, co-founder of the Deep Sea Conservation Coalition who attended the meeting. “And all of this to provide fishing opportunities for a handful of New Zealand bottom trawl vessels to catch 1,500 tonnes of orange roughy, a long-lived species of fish highly vulnerable to overfishing, on the high seas. This runs completely counter to resolutions adopted by the UN General Assembly since 2006 and global negotiations to conserve and protect marine biodiversity in the international waters of the world’s oceans.”

As a result of concerns expressed by the European Union, the regulation will be reviewed by the next meeting of SPRFMO’s Scientific Committee to determine whether in fact it does provide protection to deep-sea biodiversity. “We are urging SPRFMO member countries to scrutinize this regulation much more carefully than they have done this week and ensure that at the next meeting of SPRFMO it is amended to ensure the protection of biologically rich and diverse deep-sea ecosystems”.