You Are Here: Home » Latest News » Fisheries » Hubs of deep-water life in need of greater protection

Hubs of deep-water life in need of greater protection 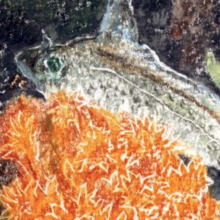 About 235km west of my workroom window, give or take a few Atlantic swells and bobbing plastic bottles, the continental shelf off Mayo slopes into the cavernous Rockall Trough.

There, from 400m to 1,000m down, stand dozens of sedimentary mounds, or reefs, up to 200m high. Several million years old, they are crowned with branching corals as hubs of deep-water life.

They form Site 0002330 on the Porcupine Bank as defined by the National Parks and Wildlife Service (NPWS). This is one of five deep-sea coral zones off our southwest and west coasts submitted as marine-protected areas (MPAs) to Ospar, the commission for conserving the northeast Atlantic.

Bottom-trawling was wrecking much of the fragile deep-sea coral, but Ospar has no legal protective powers of its own. That was why, like other European agencies, the NPWS took to the ocean and included its MPAs as special areas of conservation under existing EU habitats and birds directives.