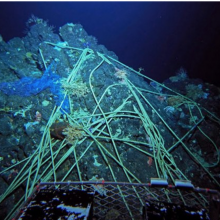 HONOLULU — Terry Kerby has been piloting deep-sea submarines for four decades, but nothing prepared him for the devastation he observed recently on several underwater mountains called seamounts in the middle of the Pacific Ocean.

“It was a biological desert,” he said. Where normally fish and crabs dart about forests of coral and sponges, “all we could can see was a parking lot full of nets and lines, with no life at all.”

Mr. Kerby and Brendan Roark, a geographer at Texas A&M University, are comparing seamounts that have been fished to those in pristine, protected areas. This month, they surveyed the upper reaches of four seamounts, one of which, Hancock, lies inside Papahānaumokuākea Marine National Monument, which includes the Northwestern Hawaiian Islands.

They knew that the seamounts had been fished by trawlers and coral harvesters at some point. “But the extent of the devastation and the huge amount of gear that was abandoned on the bottom were shocking for both of us,” he said.

Among the casualties littering the seabed were ten-foot-tall black corals that can live over 4,000 years, among the oldest forms of life on earth.

“Allowing fishing in the few protected seamounts left would be a huge mistake,” said Dr. Roark.

The shore reefs of the islands have long been protected from commercial fishing; the monument designations extended that protection to 50 miles from shore in some cases and 200 miles in others.

According to a memo obtained by the Washington Post in September, Interior Secretary Ryan Zinke has recommended that the designations of the Pacific Remote Islands and the Rose Atoll be amended “to allow commercial fishing.” (A similar recommendation was made for another marine monument, the Northeast Canyons and Seamounts, off the coast of New England.)

The memo did not mention the largest marine reserve: Papahānaumokuākea, a string of mostly uninhabited atolls and reefs that have been largely undisturbed since World War II. At about 583,000 square miles, it is the largest protected area on the planet. (Industry officials in Hawaii are pressing for commercial fishing to be allowed there, too.)