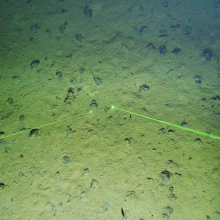 Museum scientists working in one of the remotest regions of our planet have helped reveal a completely new group of deep-sea sponges.

The sponges live on the ocean floor on metal-rich nodules. The region where they live is targeted by deep-sea mining companies interested in mineral extraction.

Scientists believe they are likely the most abundant animal living on the nodules and could be a key indicator species for measuring future mining impact.

Dr Adrian Glover, principal investigator of the deep-sea research group at the Museum, said, ‘We were simply astonished to discover that the animal was not only a new species but from a new group as well, despite the region being subject to many surveys in the past.

‘It is clear that our knowledge of the biodiversity in this region is still very limited.’

Riches in the deep

The discovery, described in the journal Systematics and Biodiversity, was made in the 5-million square kilometre region in the central Pacific Ocean known as the Clarion-Clipperton Zone.

This area is incredibly rich in useful metals in the form of polymetallic nodules – potato-sized accretions of mineral that sit on the seafloor at depths of 4,000-5,000 metres.

Over a dozen organisations have contracts to explore the region, although no one yet has permission to mine the area.