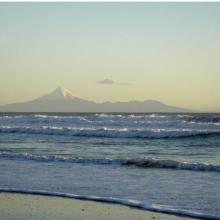 An application to mine millions of tonnes of iron sand off South Taranaki has been approved by the Environmental Protection Authority (EPA) in a split decision.

Environmental group Kiwis Against Seabed Mining, which said it was “stunned” the project received the green light, said it would appeal the decision.

Trans-Tasman Resources had asked to mine for iron ore in a 66 square kilometre area of seabed off the Taranaki Bight, the first ever proposal for that type of project.

The company intended to dig up to 50 million tonnes of iron sand each year, extracting the iron ore and dumping the residue on the sea floor.

It said the scheme would create 300 jobs and add $160 million to New Zealand’s GDP.

The authority granted the application in a public announcement in Wellington this morning.

Kiwis Against Seabed Mining chairman Phil McCabe said appealing the decision was “the only responsible route”.

“We are stunned that the EPA could have given this experimental industry the go-ahead, given the startling lack of available crucial information,” he said.

“Even the EPA’s decision-making committee was split on its decision.”

The decision set a dangerous precedent, he said.