You Are Here: Home » Latest News » Science » Bizarro Life-Forms Inhabiting Deep-Sea Vents May Be at Risk

Bizarro Life-Forms Inhabiting Deep-Sea Vents May Be at Risk 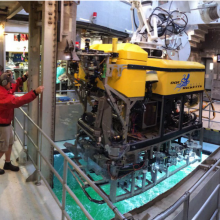 Two years ago, Shana Goffredi raced to the control room of the R/V Western Flyer, a 117-foot-long research ship in the Gulf of California. Television monitors onboard the vessel displayed what looked like an alien world near the ocean bottom, and Goffredi wanted to get a better look. On screen were thousands of tiny orange tube worms and dozens of other animals, some of which were new to science. The bizarre habitat gleamed in the lights of an underwater robotic probe as it explored the environs of a seafloor spring spewing water at superhot temperatures—known as a hydrothermal vent. What struck Goffredi, a marine biologist at Occidental College, along with the 10 other scientists onboard was how different the life-forms at this site, called the Pescadero Basin, looked from those at a neighboring site. Some 75 kilometers away in the same gulf, vents within the Alarcón Rise also hosted masses of tube worms, only they were blood-red in color. Overall, the two sites shared only seven out of 61 animal species identified. “There’s nowhere else in the world where you have this dramatic difference of species at this close of a place,” says Shannon Johnson, an MBARI researcher who was also onboard that day.

Recent research has hinted that neighboring hydrothermal vents might host different arrays of life, but the scene in the Gulf of California, as Goffredi, Johnson and their colleagues described it in the July 26 Proceedings of the Royal Society B (pdf),provides one of the first dramatic examples of this trend. Goffredi’s team thinks the local geology and chemistry of each vent effectively selects for a rare and specialized animal community that may only be able to live at that site.