You Are Here: Home » Latest News » Science » The Discovery That Could Throw a Monkey Wrench in Deep-Sea Mining 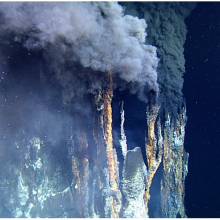 Hydrothermal vent fields on the seabed are rich in copper, gold and other valuable metals, but scientists have found that some are home to unique animals found nowhere else on Earth.

At the bottom of the ocean lie hydrothermal “chimneys” the height of 10-story buildings that spew superheated chemical fluids into an oxygen-deprived, lightless void. These hydrothermal vents nourish communities of otherworldly creatures – such as 6ft (1.8m)-long tubeworms that lack mouths and digestive tracts – and create untold mineral wealth now coveted by countries and corporations.

The mineral deposits laid down over the eons by the sulfides emitted by hydrothermal vents contain copper, zinc, silver and gold. Over the next three weeks, the International Seabed Authority is meeting in Jamaica to, among other things, draft environmental regulations to govern the mining of the deep sea. The mission: to fulfill the United Nations-chartered organization’s mandate to preserve the biological diversity of the mostly unexplored seabed while allowing the extraction of metals that make possible smartphones, solar panels and other products used by the most committed environmentalist and rapacious industrialist alike.

That job just got harder.