You Are Here: Home » Latest News » Science » Giant deep-sea worms may live to be 1000 years old or more 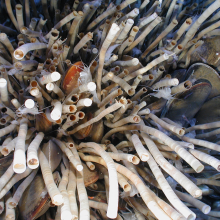 In the depths of the ocean, life can extend far beyond its usual limits. Take the tube worm Escarpia laminata: living in an environment with a year-round abundance of food and no predators, individuals seem to live for over 300 years. And some may be 1000 years old or more – meaning they would have been around when William the Conqueror invaded England.

“E. laminata is pushing the bounds of what we thought was possible for longevity,” says Alanna Durkin at Temple University in Philadelphia, Pennsylvania.

These tube worms live between 1000 and 3300 metres below sea level in aggregations from five to more than 200 individuals around cold seeps. This environment also provides a habitat for brittlestars, shrimps, crabs, mussels, clams, snails, limpets and a huge variety of smaller species of worms.

“The tube worms look like oversized plastic straws with a delicate pink flower at the end when the animal extends its petal-like plume – a gill-like organ for gas exchange – out of the top of its tube,” says Durkin. They can measure more than 1.5 metres, and feed through a symbiotic relationship they form with bacteria that thrive in these seeps.

Finding out exactly how old the worms were was tricky, says Durkin, given that they don’t produce a hard, permanent skeleton or tissue with annual, countable “growth rings”. Instead, her team had to rely on a growth model from an earlier study of a different worm species, which predicts how much a worm grows each year.