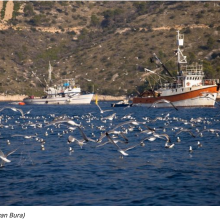 “This is a farce and the public can no longer have confidence in MSC certification” said DSCC founder Matthew Gianni. “If the MSC can certify this fishery, which threatens to destroy deep sea corals and other long-lived and vulnerable deep sea species and habitats, as ‘sustainable’ and describe the fish as ‘responsibly caught’, then it lacks any credibility. The MSC should either be fundamentally reformed or replaced by a standard that the public can have confidence in.”

Barry Weeber of New Zealand’s ECO said that “The New Zealand orange roughy fishery history has been one of serial depletion and repeated stock crashes. It was not enough for the assessor to say that he understands concerns about past fishery performance and current uncertainties. The unsustainability of orange roughy fish stocks is a crucial concern and anyone who buys orange roughy can have no confidence that the fishery is sustainable.”

“The conclusion that fisheries would continue to be fished along existing tow lines is simply wrong,” said Claire Nouvian of the French conservation organization BLOOM, which also objected to the fishery. “This is a serial depletion fishery which relies on continuing to find new fisheries to deplete.”

“It is a travesty that this obviously unsustainable fishery, which has been demonstrably overfished for many years, has been certified by MSC,” said Oliver Knowles, Oceans Campaigner for Greenpeace New Zealand.  “But it’s hardly a surprise. It follows many other controversial fisheries we have fought against but were certified anyway. The MSC is clearly broken, without urgent reform it now risks setting the sustainable seafood movement back by misleading consumers.”

A controversial and damning report showing that the New Zealand fishing industry were dumping fish was excluded from consideration during the certification process. The paper includes details of under-reporting, dumping of fish and misreporting of orange roughy. The report showed that the real catch was 2.7 times the reported catch. Also excluded from consideration was a New Zealand government report stating that the New Zealand government had known about fish dumping and discarding issues for many years.

“It is unfortunate that the key New Zealand government report revealing massive under-reporting of catch, and a slew of scientific reports, were ruled inadmissible by MSC,” said DSCC lawyer Duncan Currie.