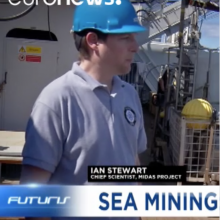 Scientists fear that even before one of the last frontiers of exploration, the ocean deep, has been properly studied it will already have been exploited by commercial deep-sea mining looking for rare metal and minerals on the ocean floor, leaving its unique ecosystems badly damaged.

Astonishingly less than 0.05 percent of the ocean floor has been mapped at a level of detail where objects a few metres in size can be discerned. Marine biologists estimate that there are around 750,000 marines species yet to be identified, many of them likely to be found in the deep sea.

The mining industry has been developing technologies to extract metals and minerals more than 500 metres down on the seabed and it’s expected that commercial mining will start for the first time in 2018 around Papua New Guinea.

But before that happens the midas project, which is made up of scientists, industry figures, ngos and legal experts from 32 organisations across Europe, hopes to gather enough data to gain a good picture of what damage might be done by mining and so inform regulators of what needs to be put in place to protect the deep sea environment.