You Are Here: Home » Latest News » Fisheries » Why We Must Act Now To Protect The Deep Sea From Destructive Bottom Trawling 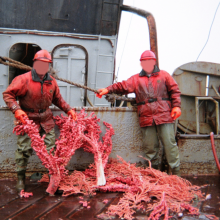 I’m planning a trip to St. John’s, Newfoundland this week and while I’ve been there several times, this visit seems more important than others. It was in that city, a little over a decade ago, that I attended a meeting with a number of scientists and began to get substantively involved in efforts to protect areas of the high seas from the impacts of bottom trawling.

Bottom trawling is an industrial scale fishing method, which uses huge nets with heavy chains, metal ‘doors’ to keep the net open, and rollers that scour the seafloor, destroying everything in their path. It has been compared to clear cutting a forest to catch a few squirrels.

Newfoundland is the beautiful, iconic, windswept rock in eastern Canada with adjacent waters once home to some of the most abundant fish stocks in the world. Through decades of overfishing, which started in earnest following World War II when factory trawlers pushed aside smaller fishing vessels and the sailing fleets, Canada and other countries managed to decimate not only the cod stocks, but much of the fragile ocean floor through destructive fishing practices.

“A new report by the Deep Sea Conservation Coalition makes it clear that while there are areas that are now protected from bottom trawling, there is much still to be done.”