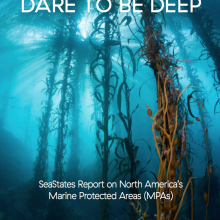 North America is far from reaching national and international targets for protecting oceans, according to a first-of-its-kind report released on Wednesday.

The Dare to Be Deep report, created by a coalition of NGOs in the US, Canada and Mexico, finds that less than 1% of these countries’ oceans are protected like national parks – with only four years left to reach the 10% protection goal set in the multilateral Biodiversity Convention.

The US is not a signatory to the agreement, but Barack Obama affirmed his commitment to reach the goal in a joint statement with Canada’s prime minister, Justin Trudeau, in March.

Michael Gravitz, director of policy and legislation at the Marine Conservation Institute, said if the countries fail to reach the 10% goal, “we would expect the sort of diversity of life that lives in some of these places to be thinned out, to become less biodiverse, less stable, and less able to resist the changes that warming and acidification bring”.

For more, go to: http://www.theguardian.com/environment/2016/jun/01/north-america-ocean-preservation-target-report