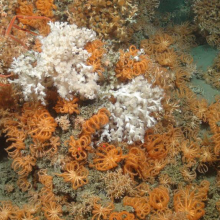 Concluding arguments in a case which could set international precedents for deep seabed mining were heard today, in Wellington, New Zealand.

The case concerns the granting of exploration licenses for phosphate mining in the Chatham Rise – an area of ocean xx miles from the coast of South Island, New Zealand – and has pitted environmental groups against the mining company, Chatham Rise Phosphate, and its intended contractor, the Dutch dredging company Boskalis. The mining would affect an area up to 5000 sq km in size, at  depths of up to 450m.

Duncan Currie, the lawyer representing the interests of the Deep Sea Conservation Coalition (DSCC), Greenpeace and Kiwis Against Seabed Mining, presented his closing submission to the Environmental Protection Agency Hearing, saying that the proposed mining poses serious and unacceptable risks to the marine environment and should be rejected. It is heard by a 5 person committee appointed by the Environmental Protection Agency.  The findings of this hearing will be keenly followed around the world.

Currie told the hearing that the application was premature due to a lack of information and understanding about the impact that the mining will have on fragile habitats found this deep in the ocean.  He said: “The Environmental Impact Assessment was far from adequate. There’s a lot of information missing, but what we do know is that this mining will destroy virtually all life on hundreds of square kilometres of the seabed, including rare, vulnerable and endemic species.” New Zealand, with other countries, has entered into commitments in the United Nations to protect these deep sea ecosystems from harm from bottom trawling. Mining is a new threat.

Currie added: “Deep seabed mining is the next big frontier for ocean exploitation and puts hundreds of thousands of kilometres of fragile environment at risk at a time when we need to be securing ocean resilience, not undermining it further.”

The list of damage that phosphate mining in the deep ocean could cause includes destruction of deep-sea corals, sponges and other deep-sea life, and the creation of plumes including toxic materials, with high levels of uranium, which will smother everything for hundreds of square kilometres. The effects from uranium and its derivatives (including toxic polonium, which is known to accumulate through the food chain) on the marine life and food chain are unknown, as are the effects on the wider ecosystem, including fish and fisheries.

During the hearing it become clear that there were numerous enforcement and compensation issues, along with health and safety concerns, that arise because the proposed mining ship would fly a foreign flag of convenience from Cyprus.

Phosphate mining extracts phosphates for use in agriculture.  Applications are also being submitted by other companies in different areas for the exploration, leading to the extraction, of minerals from the crust of seamounts, from polymetallic nodules lying on the seabed and from hydrothermal vents.

The Hearing is expected rule in mid December.