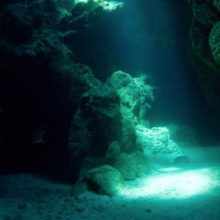 Cerium, dysprosium, thulium, yttrium — unpronounceable names that may look like sci-fi gibberish, but they’re actually elements — and they’re in your smartphone.

Rare earth minerals, 17 in all, are the building blocks of most high-tech devices because they react with other materials in unique ways that produce everything from powerful magnets to light batteries. But due to a stagnating number of functioning mines (85 percent of which are in China), we are running out of the elements, and, according to the U.S. National Academy of Science and the European Union , we may soon face a serious shortage.

But there’s hope, thanks to a new underwater effort to locate more of these precious minerals.

Ocean floors — at depths up to 16,400 feet — happen to be covered with vast quantities of strange, potato-size rocks that are rich in manganese, iron and rare minerals.

These “ferromanganese modules” can be found in large deposits off the west coast of Mexico, in the Peru Basin and in the center of the Indian Ocean. They were first discovered by a British scientific expedition in the 19th century, but harvesting them at a commercial scale seemed economically unviable and technically impossible.