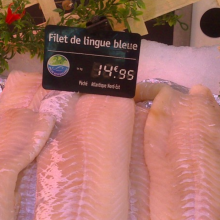 The debate on the impact of deep-sea fishing is raging on in France after a cartoon strip on a blog caused more than 600,000 people to sign a petition asking the French president Francois Hollande to lead a ban on deep-sea bottom trawling.

It all started with the non-governmental organization Bloom, which has led a fierce campaign against deep-sea bottom trawling, advocating in favor of the European commission’s proposed ban on all bottom trawls and bottom gillnets targeted at deep-sea fishing within two years.

As soon as the EU proposal was unveiled, the French EU commissioner for internal markets, Michel Barnier, said he would oppose it. Spain has also spoken out against the ban.

The EU parliament is due to vote on the issue on Dec. 10.

But the debate took on a whole new proportion after a blogger, Penelope Bagieu, decided to illustrate Bloom’s argument in a comic strip (in English: www.penelope-jolicoeur.com/2013/11/take-5-minutes-and-sign-this.html ) on her blog on Nov. 18.

For more, go to: www.undercurrentnews.com/2013/11/27/deep-sea-fishing-debate-rages-on-in-france-after-cartoon-strip-leads-to-600000-strong-petition/