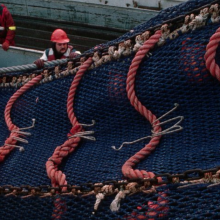 A historical moment for the life of the oceans is at hand as the Fisheries Committee of the European Parliament wrangles with proposed legislation to phase out the use of deep-sea-bottom trawls and other destructive fishing gear in the Northeast Atlantic. And yet this crucial legislation could well be killed in coming days, not least because some of the committee’s 25 members represent districts with powerful interests in deep-sea fishing.

As they discuss the merits of the legislation, many of the panel’s members are prone to repeating partial truths supplied by lobbyists about the sustainability of deep-sea fish stocks and the lack of damage to fish life at the bottom of the ocean. If these voices prevail in a vote later this month, then the committee will have succeeded in keeping the measure bottled up and away from consideration by the full Parliament.

The biodiversity of the deep sea is equaled only by that of tropical rain forests, and the destruction of rain forests has long been known to affect biodiversity and the global climate. Similarly the deep sea is home to countless species, including the oldest known living animal and to life-forms found nowhere else. Ninety percent of the ocean is below 200 meters, but not much is known about life in the deep sea; expensive research sampling has been done in about 1 percent of this vast area.