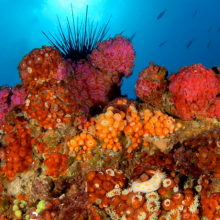 I’m happy to start 2013 by sharing some inspiring news from my country, Chile, one of the world’s top fishing nations. The good news is that our Government and National Congress, following campaigning by Oceana, overhauled our fishing laws by banning bottom trawling in all vulnerable marine ecosystems (including all seamounts in Chile), requiring the implementation of reduction plans for bycatch and discards of ocean species, and ensuring that fishing quotas are based on science rather than politics.

According to a report presented to Chilean lawmakers by Oceana, in the past decade catch limits for three of Chile’s major fisheries – anchovy, jack mackerel, and hake – far exceeded scientific recommendation (by 78 percent, 87 percent, and 193 percent, respectively) and as a result, this blatant overfishing greatly endangered the future viability of these resources. Under the new law, fishing quotas will be decided by independent scientific committees, without participation of the fishing industry.  This means that Chile’s catch will no longer exceed scientific recommendations and will, hopefully, become sustainable. This is incredibly important in my country as fishing is a major source of jobs and economic activity.

The new legislation also makes Chile the first country to protect all its seamounts from bottom trawling.